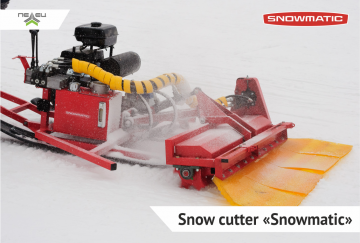 Snowmobiles, widely used for ski trails preparation, only press the snow, but they cannot cut snow humps or plane holes. Snow knives (graders), provides snow humps cutting, but the getting smooth snow surface is short-lived, because under a thin layer of pressed snow the soft snow mass is stayed. Under the conditions of packed snow (temperature differences or very hard-packed, but broken ski-track), snowmobile just cannot cope with the task that the cutter will execute quickly and efficiently.

Snow cutter «Snowmatic» available in two versions and has a number of advantages:

·         control panel mill located on the driver's panel, it is allow to change the mode of snow cuts operation promptly (tracking and specifying modes of carving or processing the trails), reverse function allow to remove foreign objects (stones, branches, driftwood, etc.) fallen         under the cutter quite quickly.

Using of snow cutter dramatically reduces costs for ski track running and maintenance – If the snowmobile has to go on track several times a day, after snow cutter processing ski track retains its shape for a few days.

Ski track tracers attached to the snow cutter and not just squeeze the perfect shape and consistence of the ski track, but also move the width of the tracers to change the distance between the near-by located ski tracks, which is especially important for the organization of competitions at various levels (laying trails in accordance with the characteristics of the terrain and in places mass start and finish).

The snow cutter allows preparing the ski track for a specific task, some special event or customer requirements quickly and with appropriate quality, for example in accordance with main international standards:

Using of «Snowmatic» snow cutters in combination with amphibious all-terrain vehicles "Pelec" will run the ski tracks without any risk even on ice on rivers, lakes and other water surfaces. In case of ice-hole falling (the probability of falling through thin ice minimal due to low tracks pressure on the surface of the ice) amphibious all-terrain vehicle with a cutter did not sink and easily come out of the ice-hole in the hard ice or on the shore